“I roamed and rambled, I followed my footsteps, to the sparkling sands of her diamond deserts” – Woody Guthrie, This Land is Your Land

Unable to finish the veritable mountain of fish and chips served at the Sweetwater Bar and Grill, I threw on my pack and turned right up the street. The PCT runs smack through the center of Agua Dulce so technically, anyone who has strolled the sidewalk there can call themselves a PCT section hiker! I attempted a pace below the sweat threshold but my nice clean clothes were soon rehydrating in the warmth of late afternoon. I moseyed only about 5 miles up into the hills before camping on a small bluff overlooking a distant farm.

Following footsteps in the clouds

I was surprised to wake the next morning to moderate condensation on all my things. As the sun was preparing to makes its appearance, I set off further uphill noticing a bank of clouds rolling up the valley toward me. Little did I know then, the sun’s appearance would be canceled for the day.
I soon became engulfed in cloudy mist blowing up and over the hills and spent the day trying to remember the trail from last year. With visibility never more than a few hundred feet, all context was lost save for the familiar track of footprints and trekking pole marks leading ever onward. The day became surreal with only a few familiar landmarks flashing briefly from the clouds. A particular spring here, a shovel signpost there, the road crossing where Joel brought me doughnuts last year, all else was obscured by weather that felt more like hiking in Washington. It never really rained but enough moisture blew about to dampen everything except my spirits. I finished the day enrobed in water and had to quickly pitch camp before losing body heat. 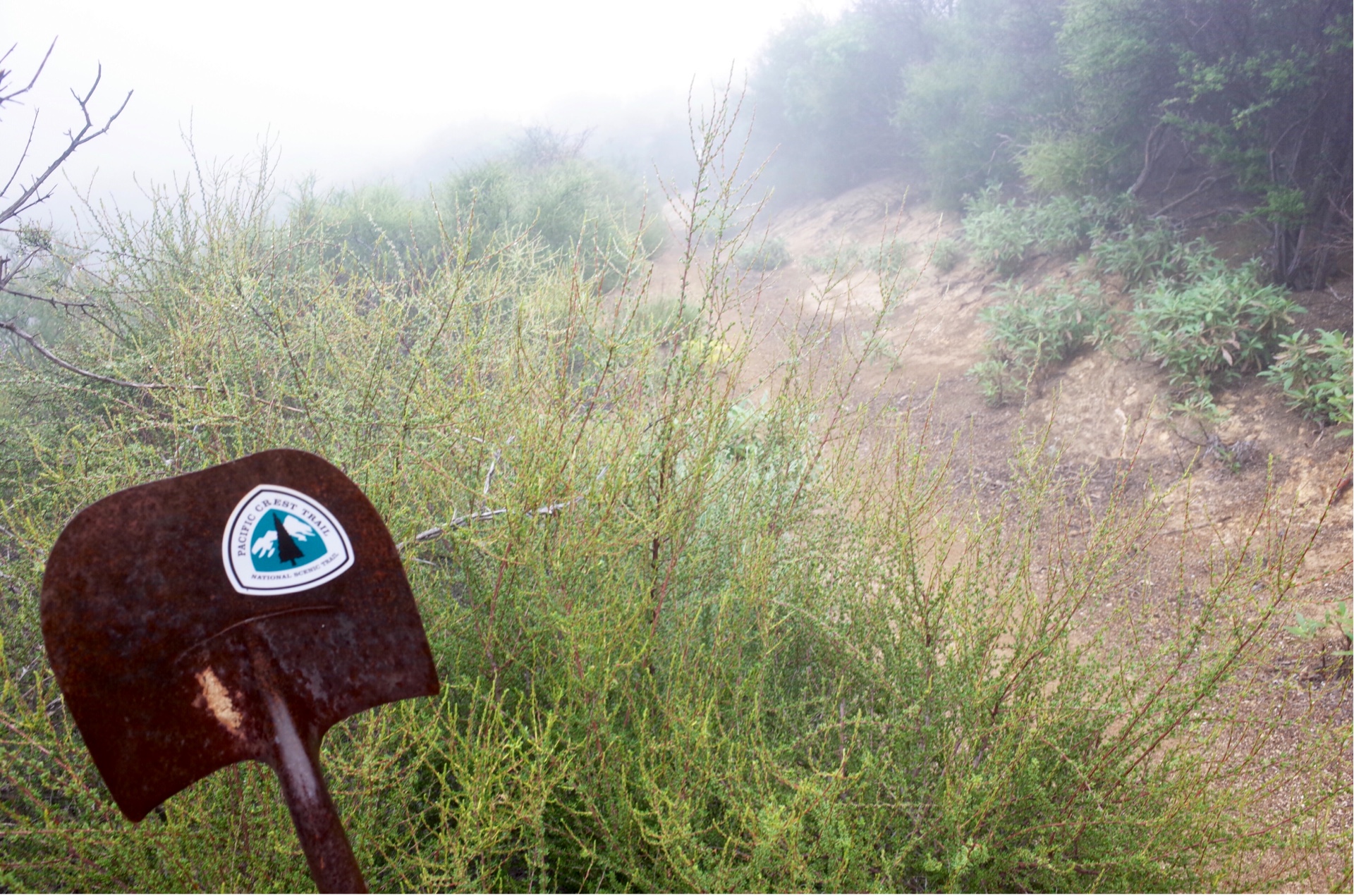 A memorable signpost from the Boy Scouts

The next morning was a dreary exercise in donning wet clothes and stuffing wet everything else into my sodden pack. I wandered through the unseasonable cloud bank most of the second day too, fortunately with less moisture content, and passed the 500 mile mark some time after noon. Woot! Only as I was descending in late afternoon out of the hills did the sun break through and provide a chance to dry my things. As the last practical stop before the 10 mile drop down into Antelope Valley, my camp spot proved popular with Voon, Professor, Taiwan Bob, Ping, Irene, and a few others grabbing whatever flat spot they could find.

Camping below the roiling clouds

Mother’s Day dawned in brilliant blue majesty with hundred mile views out into the Mojave Desert from our hillside camp. An easy walk down soon had me back in HikerTown, a quirky, dusty stop for most hikers, full of derelict vehicles and miniaturized facades of an Old West town. Conventional wisdom says cool your heels in HikerTown through the heat of the day and only then set off for the 17 mile waterless jaunt along the California Aqueduct. Most people attempt it only at night. Indeed I remember last year stripped to my skivvies laid out behind the ‘saloon’ trying to beat the heat before setting off some time after 6pm.

But did I mention it was Mothers Day? This time around it was in the mid 70’s under a bright blue sky…at noon…with a tailwind. The invitation from above did not fail to register and I set out just after noon. I somehow missed the same turn I missed last year, though in broad daylight this time, but already wary, was quickly able to course correct. It turns out the sign there has gone for a wander of its own. In any case, I arrived at the Cottonwood Creek Bridge (and more importantly the faucet tapping the aqueduct) before the sun had set. I pitched my tent, took my camp shower, made dinner, and enjoyed my providential evening.

The armies of Joshua have the technology surrounded

Benign weather only enhances the privilege I feel for being out here. The pleasant contrast with last year’s extreme heat and wind made the climb up through the giant wind farm a relative joy. I smiled and shook my head as I passed the low scrub juniper bush I had huddled under last year for its scant shade. At the most unlikely mile 549.5 way-station- chairs, water, shade, fresh fruit(!), all seemingly in the middle of nowhere, I met up with another group of hikers. MilkShake, Mantis, ChillBill, Bohica and his son Mustang (14 years old!) had been hiking together since Warner Springs. MilkShake, who hiked the Appalachian Trail last) mentioned she had hiker friends waiting for her at the road crossing 8 miles ahead.

Looking east towards Mojave and Edwards Air Force Base 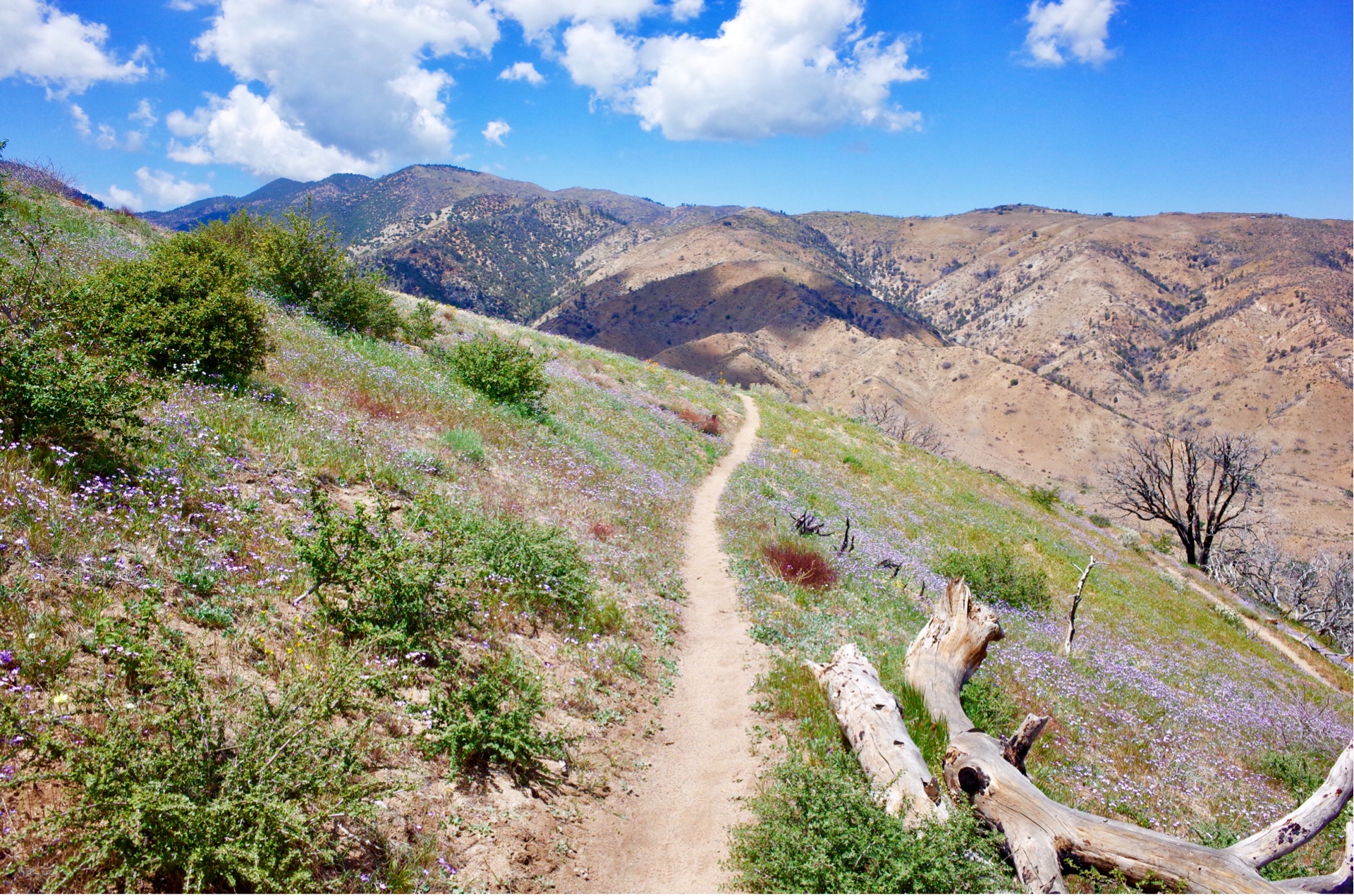 Sure enough, when we got there MudFoots, SafetyChute, and YourHighness were there set up with hot dogs, doughnuts, sodas, and my favorite, cold beer. Note, these were not trail angels. These were current thru hikers that have already made it to Kennedy Meadows at mile 702 and who had backtracked to support the community. They are taking some time out to allow the Sierra to melt out and having fun doing it. Somewhere in the clouds I had also enjoyed a beer with Yankee, a CPA from Boston and also a current thru hiker, who had already made it over Forrester Pass and was taking two weeks to allow more snow to melt before resuming. He had visited Las Vegas, hiked to the bottom of the Grand Canyon, and was now back doing trail magic for his fellow hikers. I love how the trail’s bounty folds back on itself. Should you ever doubt the essential goodness of humanity, I’d suggest try hiking.

A short 8 miles through yet another wind farm saw me to the junction with Highway 58 leading to Tehachapi. I walked the last few miles with Yoda, a guide from Flagstaff, AZ who has been waiting 35 years for his chance at the PCT. We compared notes and laughed about my ice cube story from last year. What a difference a year makes!
Today marks the end on my first 4 weeks and I’m celebrating with laundry, a shower, fresh food, and cotton sheets in beautiful Tehachapi, CA. Cheers!