By the time I had completed navigating the western rim of Crater Lake, thunderheads had gathered in the south and were advancing north. It made for a dramatic if not slow motion chase as I scurried down from the crater rim avoiding all but a smattering of rain. Glancing back to watch the frequent lightning strikes, I suspected many of the tourists visiting Crater Lake that afternoon rued their bad luck with weather.

The craggy pinnacle of Mt Thielsen loomed ahead and I spent most of the next day walking around its immediate vicinity. 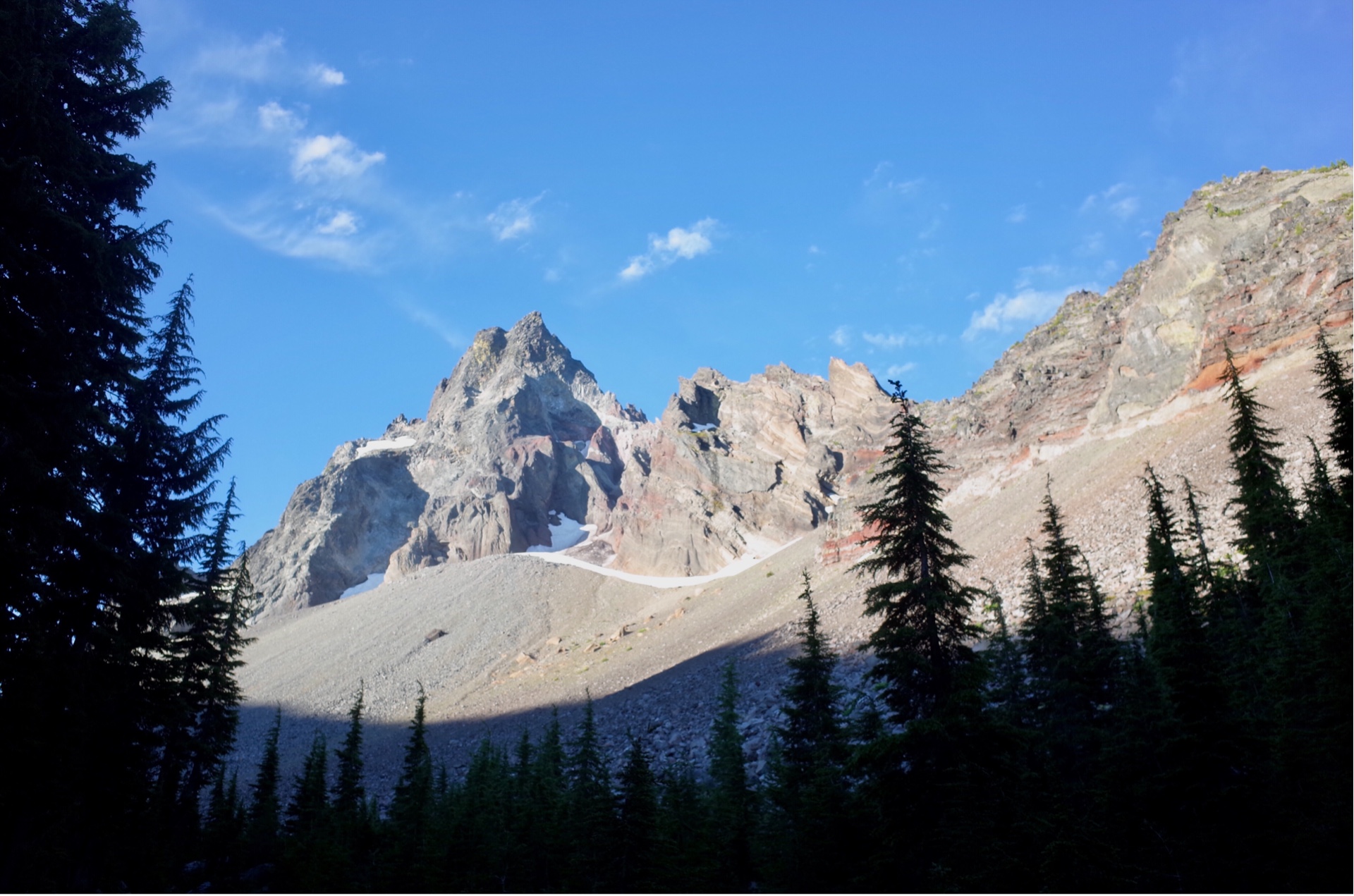 Mt Thielsen watching over the trail

For the next couple days, the forest closed in once more though many small lakes and ponds began to appear along the trail. I had been hoping for such water for quite some time to repair my air mattress. Fortunately, way back in Northern California, a sudden flash of intuition prompted me to check the opposite side of where I had first applied a patch. Sure enough, fixing a tiny hole there solved the mystery of my slowly deflating mattress. I know I was the only one losing sleep over it but was gratified nonetheless. Though my need had passed, the appearance of many lakes did afford me the opportunity for a few refreshing swims. 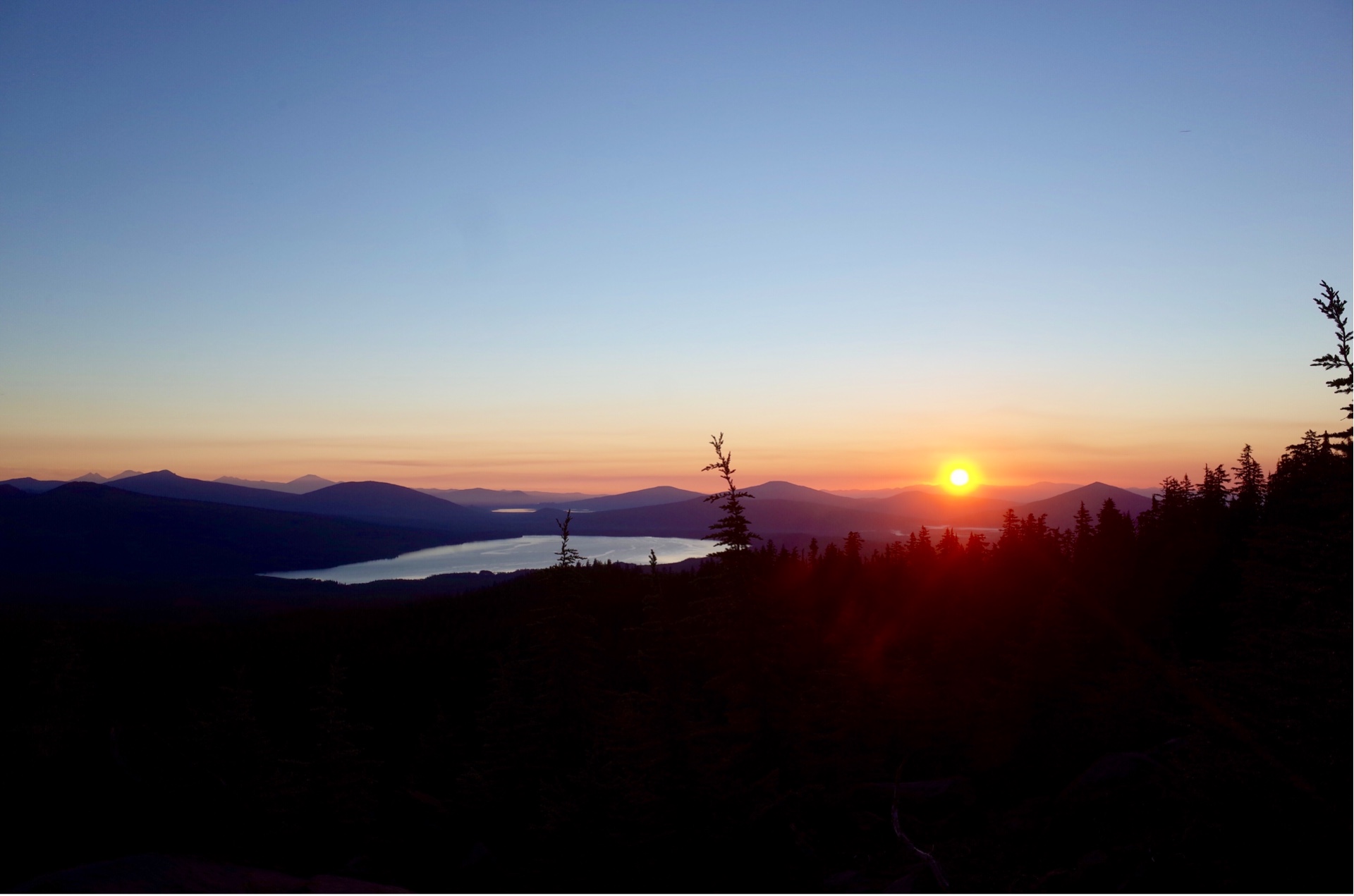 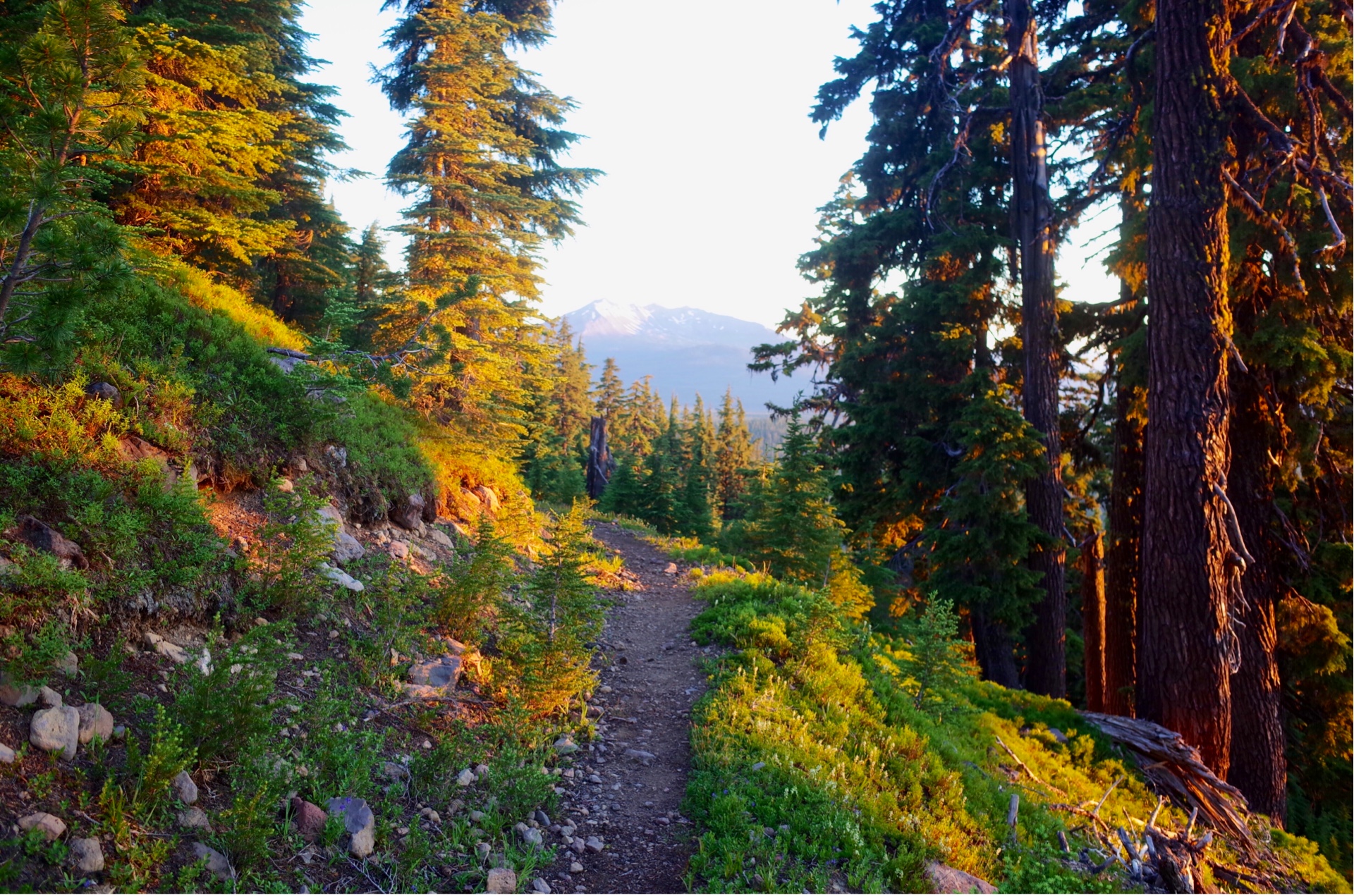 As everyone said they would, the miles in Oregon came easily though walking 12 hours each day, every day may have cause a few screws to loosen. I likened my mind to a television with many channels. Of course the news channel droned on and on about miles, time, and pace, forever calculating numbers regardless of interest or utility. For some reason the music channel played only fragments from a single song each day on endless repeat. Though at random and regardless of genre, at least a new tune appeared each day. From ‘Happy Birthday’ and ‘Strangers in the Night’ to the likes of Prince, Pink Martini, and Sean Cassidy, I took issue with whoever runs central programming. I avoided the food channel as best I could but inevitably some delectable image slipped through. The friends and family channel proved endlessly diverting as I wondered about the happenings in everyone’s lives. The history channel delved past memories while the future channel looked ahead to what’s next. 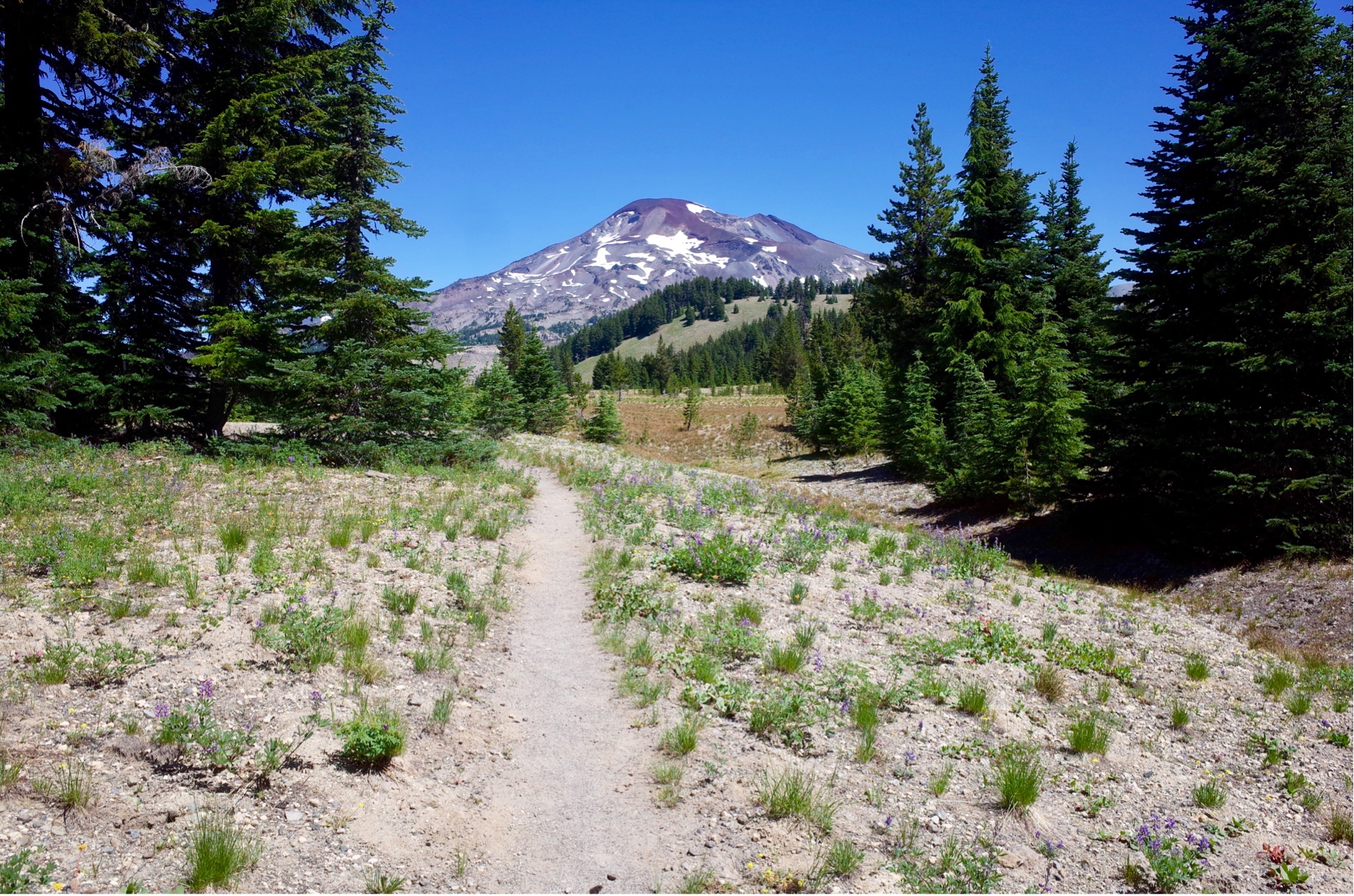 My difficulty however stemmed from whoever was holding the remote. With nothing of note happening on the trail, some diabolical hand kept flipping channels incessantly, returning frequently to the music channel, and generally trying to fill the void of endless empty miles. In yoga it’s called ‘monkey mind’ and quieting it creates the space for a relaxing practice. I struggled. 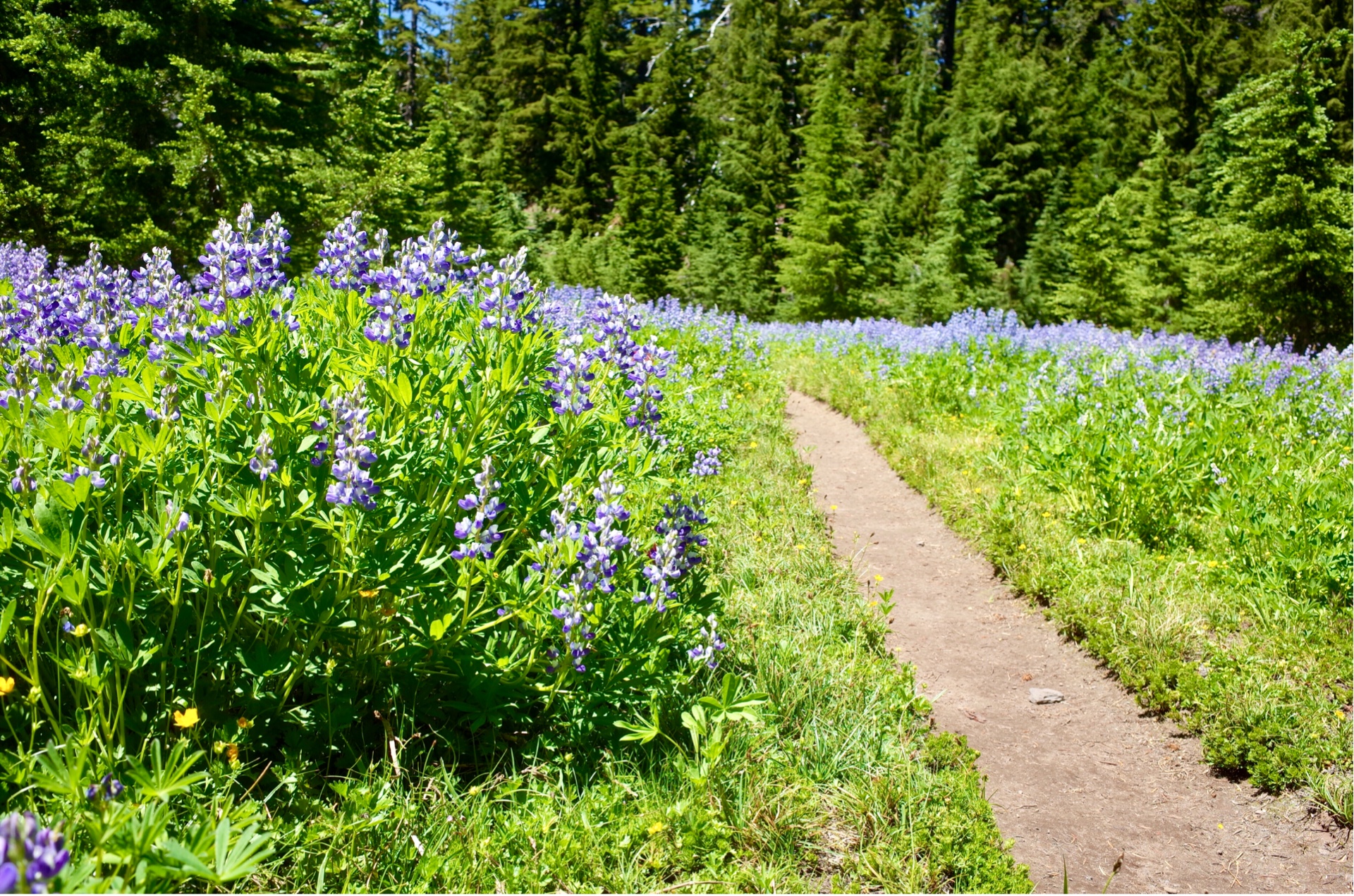 If you could smell what I see

Speaking of yoga, I have developed a condition I believe to be called ‘butnoasana’. The design of most backpacks presumes that the hip belt will carry the bulk of the weight. Posteriorly challenged from the outset, I have nothing left to stop my belt from sliding down causing most of the pack weight to fall on my shoulders. When Chris saw me at the hot springs he wryly commented, “You really have walked your ass off.” I am pretty sure my measurements now would be something like 28-28-28.

Fortunately the PCT provided a sure antidote to my mind’s insidious channel surfing and the frequent hoisting and cinching. My mind quieted and all was forgotten as I entered the alpine wonderland of Three Sisters Wilderness. Eugene, whom I had met at Mazama Village, mentioned the Three Sisters as the favorite stomping ground of his youth. True to form, fields of lupine in bloom scented the air while glacial creeks chuckled through gorgeous meadows under the pristine watch of snow clad peaks. It was simply stunning and I was captivated. 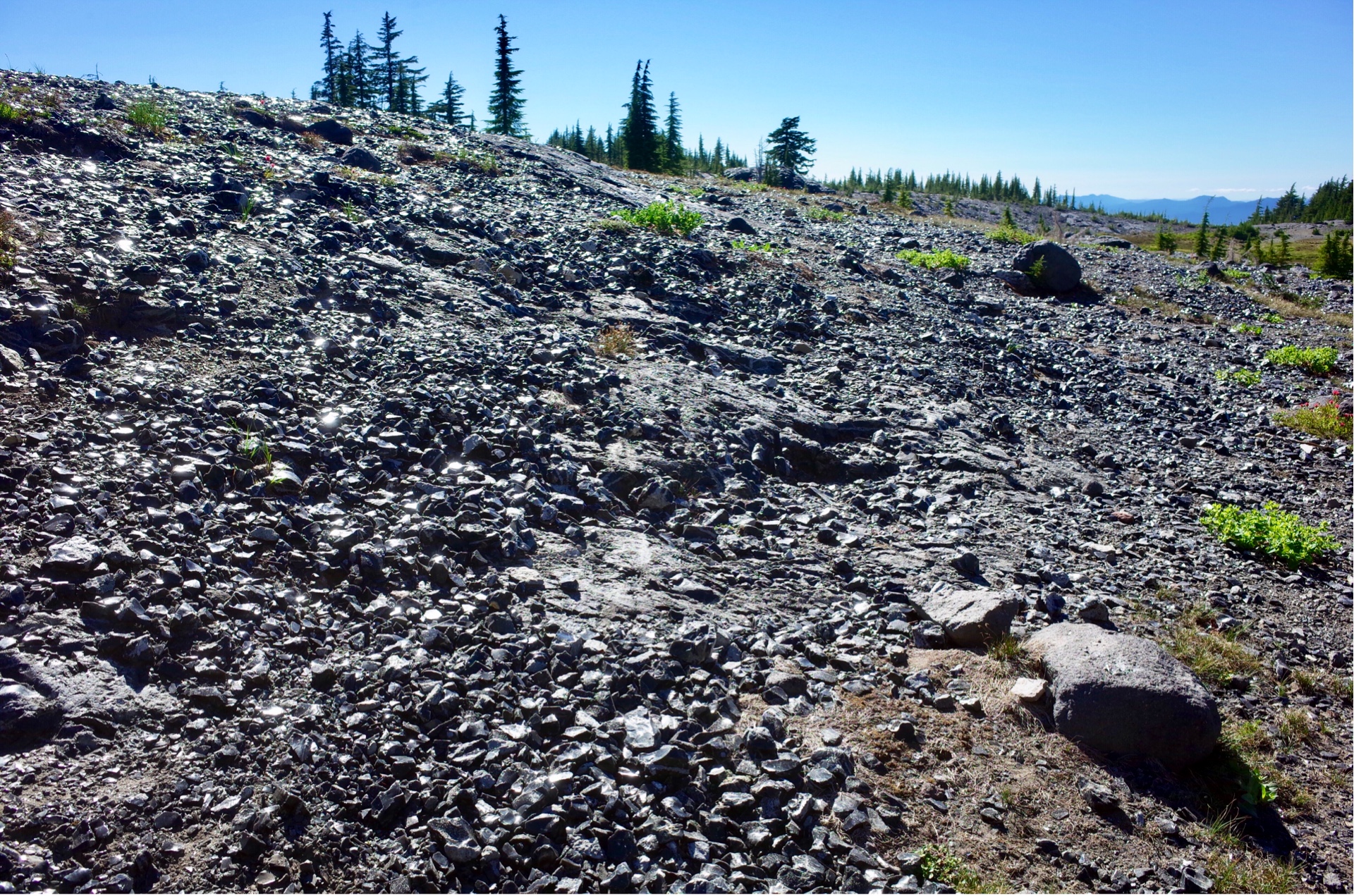 The trail traversed an area called the Obsidian Limited Entry Area. Despite its clumsy name, glistening black glass reflected the afternoon sun and a creek head flowed miraculously out the side of a mountain to soon drop over Obsidian Falls. It was a magical place to behold.

The hike the following morning was less magical climbing up and over miles of arduous lava fields. I crossed most of it during the cool morning hours and was thankful not to discover it late afternoon. 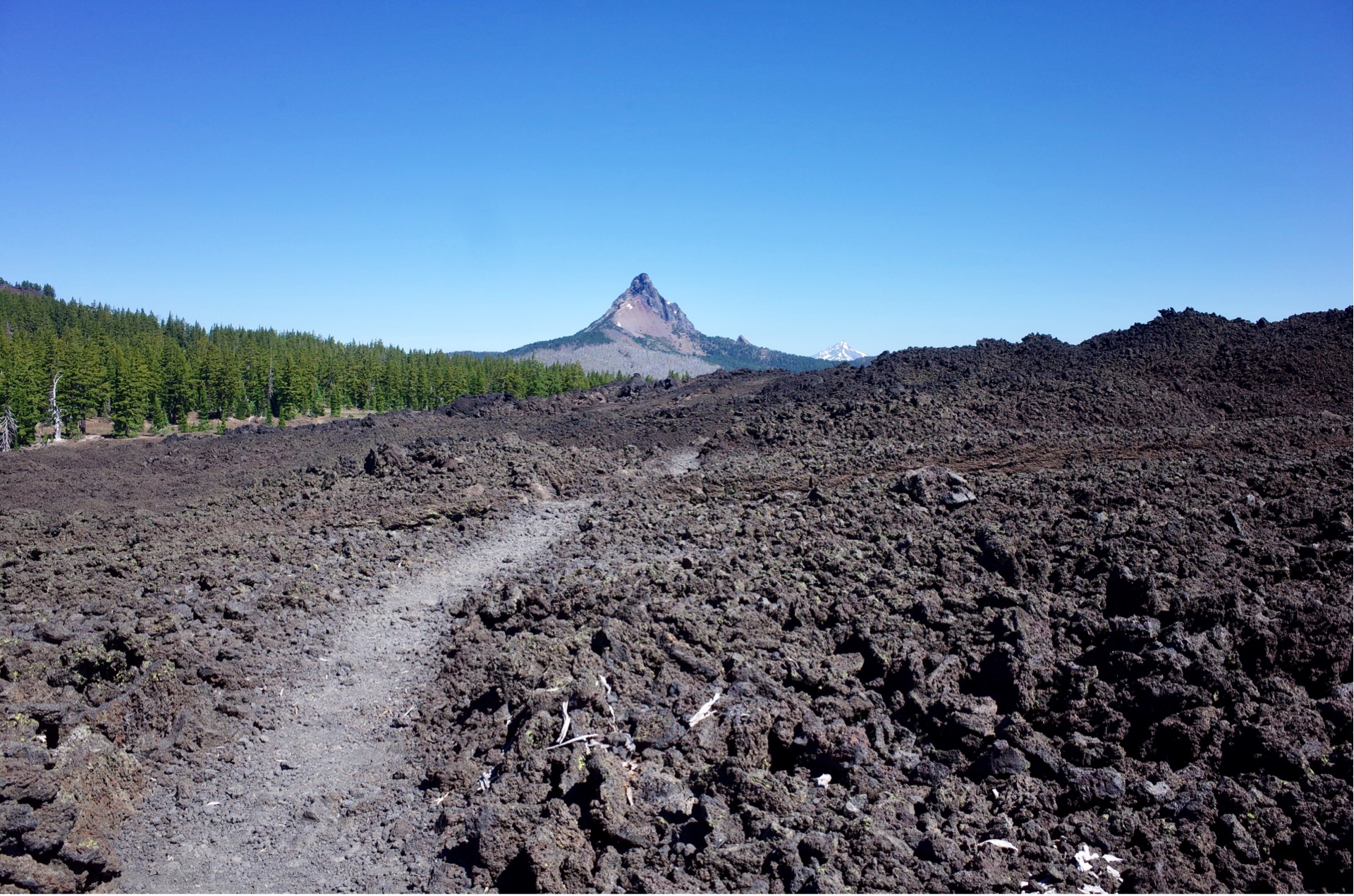 I walked the last 8 miles or so into Big Lake Youth Camp with a young couple from Queens. Klutz and BugBait were finishing up their 3 week section hike through southern Oregon. We enjoyed a great conversation that not only passed the miles but also kept my wandering mind well occupied.

Big Lake Youth Camp set a new high bar in rolling out the welcome mat for PCT hikers. A beautiful summer camp to begin with, they had just recently completed work on a separate hiker facility complete with showers, laundry, kitchen, power outlets, and resupply holding area. I happened to miss their fabled meal service because the camp was not operating the day I was there but I’m told it’s spectacular and all offered for donations only. 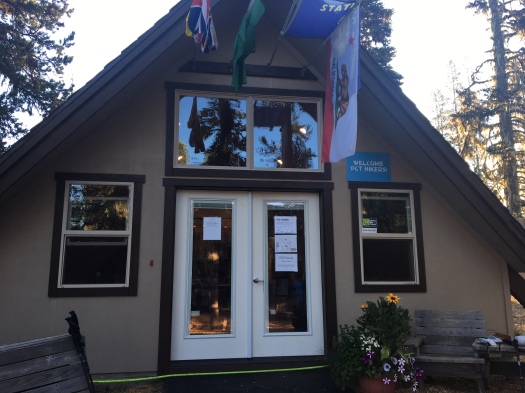 And this just in from the news channel… I have now completed 75% of the PCT!